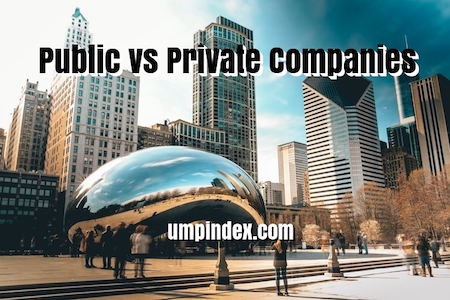 Investors and employees have a wide variety of factors to choose from when considering an employer or investment opportunity. They have to look at the business that a company is in and their financial data. These individuals should also pay close attention to the status of a company and whether that company is public or private. Such a distinction can completely shift the calculus on where a person ends up going for their career or investments.

There are many advantages to working for and investing in both public and private companies. Public companies offer a number of benefits to potential investors. The shares from public companies are publicly traded on some sort of market. They are often easy to obtain and can be obtained in bulk. A person can gain a large number of shares and eventually be able to help the company make decisions with their votes. There are also a wide variety of disclosure requirements with publicly traded companies. Companies have to report their earnings per share. On the other hand, these companies are subject to greater public scrutiny and can be more volatile than less transparent, more stable private companies.

What is a Public Limited Company?

What Does it Mean when a Public Company Goes Private?

Public companies go private somewhat frequently. This act often involves a handful of investors buying up all of the stock in the company and refusing to publicly sell or trade those stocks in the future. They are no longer burdened by the disclosure requirements that the government imposes upon them. Many of these companies do not even have to give out their income or financial information to the public.

This process does create some problems for the now-private company, however. It will not be able to raise capital from the public like it could before. Also, the process of going private involves buying a large number of shares. The need to go private creates demand for shares and this demand drives up the price. A company may have to pay out a significant amount of money in order to buy those shares up.

Should I Work for a Private or Public Company?

Public and private companies are significantly different in many ways. There are many types of both kinds and many reasons to work at one or the other. Public companies invite public scrutiny in a way that private companies do not. This scrutiny can be helpful if a person wants to know the full range of a company’s finances before investing. It can also be helpful to employees. There will be more agencies ensuring that a company is operating in an ethical behavior and being transparent about its labor practices. If an employee blows the whistle at a public company, there is a greater chance that a government agency will notice and respond accordingly.

A private company offers its own benefits. One of the greatest benefits at a private company is the expectation that the company may one day go public. Some private companies pay their employees in deferred stock and stock options. The idea is that the employees are building up stock so that they will be able to take advantage of an IPO. In many IPOs, a stock’s price jumps significantly as the market figures out its greater worth and investors start to flood in. Increased demand leads to increased prices. There is always a chance that such a process will make an employee rich.

It’s Up to the Investor / Employee

Public and private companies both have their own examples of legitimate, successful, and shady behavior. Some of the greatest scandals in American business history happened at public companies. Meanwhile, some private companies are particularly generous and make great business decisions. It is up to a potential employee or investor to conduct research and perhaps interview current employees in order to know whether a public or private company best fits their needs.